The engine on the left is a Ford/American LaFrance rural pumper. The prototypes were cranked out by the hundreds in the '70s and '80s. They were sold as replacements for aging American LaFrance 700 and 900 pumpers. To keep costs low, bodies were often refurbished and optional equipment like foam and hose reels were left off. This model uses an Atlas Ford LNT cab and chassis with a Bachmann American LaFrance 900 body. The light bar was borrowed from an Athearn pumper. The Ford/KME pumper shown on the left has an Athearn pumper body mounted on an Atlas Ford LNT cab and chassis. This was a very quick project taking only about an hour, including the painting. Dan will add side view mirrors to finish the model. The light bar is a clear plastic strip painted with Tamiya clear red. 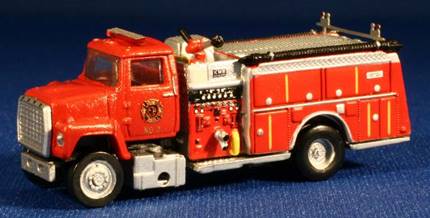